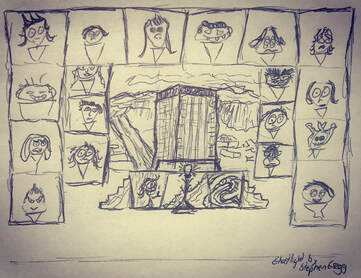 When Garbiela Nettles is admitted to Doves Forge, a prep school, she’s not nearly qualified for, she starts to see and hear things that no one else does. With the help of two new friends, she tries to unravel the secret of her visions and of the tragedy that happened at the school a decade ago. Ghostlight is a comedy about ghosts, the past, and friendship. - Stephen Gregg, March 31, 2020
This script is subject to change through the pre-production process, rehearsal, and even performance of this show.
Characters and language will be change as this play is developed.
Ghostlight - production script - May 2020
Rehearsal Calendar
Cast List
THE STUDENTS
​Garbiella Nettles - Aliyah Pullin
Fantine - Gia Darling
Clovis - Guyon Grant
Ruth - Max Pardo
Riley - McKenna Cowles
Colby - Xavier Hylton
Billiam - Jack McCurdy
Kelvin - Carter Stelting
Maunder - Rowan Farha
Mogpin - Alana Shields
Girl Who Felt the Chill - Lake Sowles
Cara - Loren Spellman