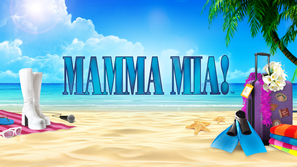 And some songs with STIG ANDERSON

MAMMA MIA! was originally produced in London by Judy Craymer, Richard East and Björn Ulvaeus for Littlestar in association with Universal.

Set/Running Crew Manager
(will be in costume)
Brandon Plumb

Costume/Makeup Crew
(Costume and Makeup may be split into two crews in February.)
(Both will work together closely, but you may be on one more than the other.)
Adonis Felton, Jake Kollman, Anna Lucas, Basanta Misha, Hailey Slaughter
Mamma Mia Bios

Understudies
(There is no understudy performance, but if any actor is absent at a rehearsal or performance, the understudy is expected to know the role. Mr. Hastings was the understudy for all of the lead brothers in Joseph and the Amazing Technicolor Dreamcoat for 82 performances at the New Theatre Restaurant. He never played one of the roles, but was in costume 10 minutes before the start of a show ready to go on for a leading role when the principal actor showed. You never know when you will be called on to perform. This is a great learning opportunity and a nice credit for a resumé, regardless of whether you ever get to play the role.)
Carter Stelting (Sam), Tyler Burns (Bill), Zachary Janner (Harry), Jack McCurdy (Sky),
Antoine (Pepper), Xavier Hilton (Eddie), Elise Bowles (Donna), Haley Cogbill (Tanya),
Abigail Dearing (Rosie), Loren Spellman (Sophie), Aliyah Pullin (Lisa), Amber Nugent (Ali), Sam McCauley (Priest)
ABBA's hits tell the hilarious story of a young woman's search for her birth father. This sunny and funny tale unfolds on a Greek island paradise. On the eve of her wedding, a daughter's quest to discover the identity of her father brings three men from her mother's past back to the island they last visited 20 years ago.
The story-telling magic of ABBA's timeless songs propels this enchanting tale of love, laughter and friendship, creating an unforgettable show. A large cast, non-stop laughs and explosive dance numbers combine to make Mamma Mia! a guaranteed smash hit for any theatre.

​A mother. A daughter. Three possible dads. And a trip down the aisle you'll never forget!